I had a long period of photographic inactivity. A busy agenda and not many moments with right weather or light made me not touch my camera for more than a month. I even started to doubt myself if I would still be able to get out  and capture the beauty of the landscape. It just took too long. Maybe it’s just waiting for spring to arrive.  Time for a change so the decision was made to take a trip to Moddergat. A small town at the Frisian coast of the Wadden Sea, close to the Lauwersmeer national park. This is a location I visit at least once a year and it never disappoints. It seems that every time I visit Moddergat it is different. One the first hand the area does not look that spectacular. Behind the dyke their is the Wadden Sea and straight from the dyke a long row of wooden poles stretch into the sea. At low tide it is all thick mud, hence the name of the small town behind the dyke. “Moddergat” means “mud hole”. The mud is that thick that it is unable to walk in it.

This evening their were a little clouds in the sky. Too little to my taste. But hopefully when the sun would disappear behind the horizon it would create som nice light. The sun was just behind me at my left side and would give nice side light. I also noticed that the retreating water had created nice structures in the mud. The lines the water created would lead exactly to the sun sinking under the horizon. That would be for the last moments of light. First I carefully made my way along the row of poles through the mud. A small rise of gras almost at the end had taken my attention. I imagined a photo of the poles with the gras and a pool as foreground subject. The side light would be great for this. I experimented with some compositions and thought the above image to be the best. Pretty happy with the composition, but the sky lacks some interest to my opinion. So changing to the mud and concentrate on the “mud structures” waiting for the sun to set. 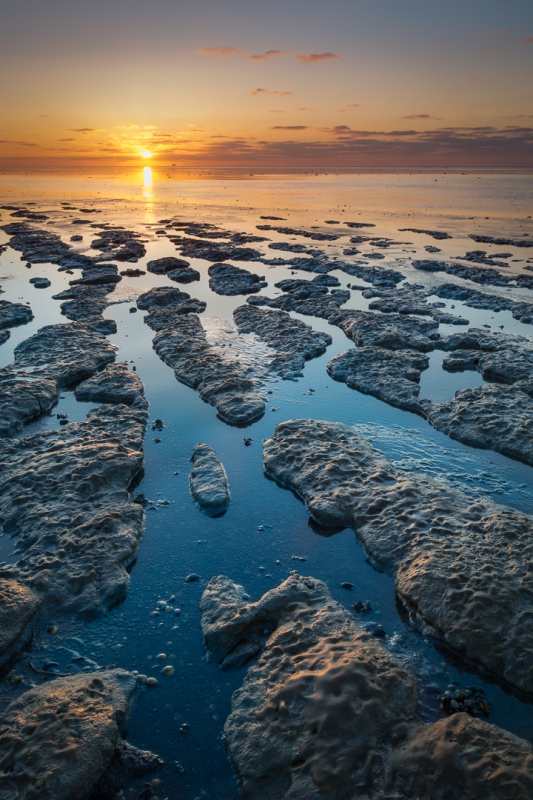 The coast of the Wadden Sea at Moddergat at sunset. The low tide created the structures in the soft mud.

Ankle deep in the muddy area, I carefully placing my tripod in the mud. The mud is sucking at my boots. Hopefully I would get them free after standing still at one place to long. Thsat would be for a later moment, first concentrate on the image. Due to the lack of interest in the sky I decided to have as much as foreground in the image as possibly, so I placed the horizon at a quart from the top of the image. To exaggerate the foreground even more I decided to use a portrait image format. A 0.6 ND hard grad would be sufficient enough to hold back the sky as the disappearing sun would be not that bright anymore. Thankfully the light transformed in the last minutes of the sunset to a golden orange, creating a nice atmosphere. After trying some exposures the sun went behind the horizon and I decided I could not make more of the situation and the area. But I was happy with the images that I had taken and at least I was back again photographing. Now just wait for one of the most beautiful moments of the year to come: spring!

By continuing to browse the site you are agreeing to our use of cookies.
error: Please note that my images are copyrighted and therefore not for general download. Please contact me if you would like to purchase an image.